This landscape here in Heringen in the state of Hesse is unusual, as it was completely built by man in the 20th century. It is a mountain, the highest in Europe (439 meters), which is not of natural origin. It is the largest and highest slag heap resulting from the exploitation of potash. Its dimensions reach 450 meters high, 1,100 meters long and 700 meters wide for a surface area of 55 hectares, representing an estimated mass of 150 million tons.

In my artistic practice where the notion of landscape is an important component, it seems necessary to me to cross this new anthropic landscape. Industry has undoubtedly generated new landscapes, sometimes in opposition to romantic conceptions.

After having visited some of the still existing and living primary forests, I was impressed to see this neo-formed landscape inherited from the industry and which reminds me of my home region with its potash mines. In Alsace as well as here in Hesse, this industry not only created new landscapes, but also contributed to the social and economic development of a whole region.

This slag heap is situated between the states of Hesse and Thuringia, which for more than 40 years were separated by the GDR and the FRG. Unfortunately, the galleries were never able to cross the borders. 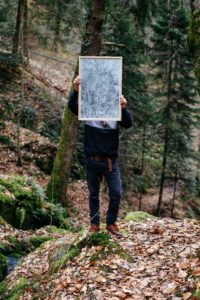